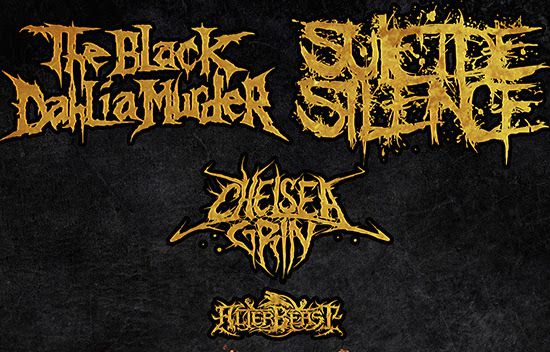 Chaos. The only way to describe this beast of a tour is with that word or any combination of words that convey the idea that what you’re about to experience is going to be a hell of a show. The ongoing tour – with 9 stops remaining – featuring The Black Dahlia Murder, Suicide Silence, Chelsea Grin, and Alterbeast was a full course of extreme metal with a serving of technical death metal, deathcore, and death metal. I can’t speak for other cities but Tampa fans were incredibly receptive to the bands, moshing throughout the night in a frenzy as if unable to control themselves.

Alterbeast were on first and delivered a tight set that would make you think the California quintet were seasoned veterans – the band formed in 2013. Their novice status didn’t show at all with vocalist Monte Barnard commanding the stage like the most capable of frontmen. The technical precision of guitarists Rusty Cornell and Andrew Lamb was unbelievable and on point throughout their set, but that didn’t overshadow the rhythym and low-end of drummer Gabe Seeber and bassist Michael Zamora. This is a band that is most certainly on the rise and one that I would most certainly catch live again, here’s hoping the organizers of the Mayhem Festival have been made aware of these guys because they certainly deserve a spot on the festival.

What followed was a stunning performance by Salt Lake City deathcore outfit Chelsea Grin, a definite force to be reckoned with. Though a lot of their songs aren’t necessarily fast, they are most certainly heavy and in no way did they discourage moshing. The fans loved it and at the instruction – it was certainly not a request – of vocalist Alex Koehler parted the floor for a wall of death. My first time seeing these guys live, definitely not my last.

Suicide Silence followed with and impressive set spanning their career up to this point, playing tracks from The Cleansing, No Time To Bleed, The Black Crown, and their latest You Can’t Stop Me. By this time you would think the crowd would have slowed down but they did not waver and continued to mosh and headbang like they knew nothing else. Suicide Silence fed off it, giving just as good a performance as any I’ve seen from them. Even though it’s been nearly two years since the passing of frontman Mitch Lucker the band are as strong as ever with new vocalist Hernan “Eddie” Hermida fitting right in. Their performance that night made one thing clear: this is a band that is not and will not be slowing down any time soon.

The closer for the night – a personal favorite of mine – was The Black Dahlia Murder who played a set consisting mostly of older track chosen by fans as well a few more from their most recent releases Ritual and Everblack. I’ve seen The Black Dahlia Murder perform several times over the past decade and they’ve never let me down. Time and time again they deliver a blistering execution of their own brand of death metal. They are a band at the top of their game that are relentless in their live assault. They fuel the crowd with their energy which in turn leads to pit after pit of mayhem, resulting in an evening of non-stop madness. The crowd response in turn feeds the band and makes them go that much harder in what I can only assume is a quest to destroy the venue.

The night was hands-down a memorable one. Each band brought their A-game and gave the audience 110% in a display that continues to remind us all that metal is alive and well. With passionate, dedicated, and driven musicians like these, metal will without a doubt continue to thrive and inspire the next generation.

October 20, 2014
Galleries News Reviews No comments Josh_Doe
← Famous Last Words, For All I Am, Kingdom Of Giants, and Whether, I tour announced Machine Head share photos from video shoot for “Now We Die” video →